It’s a surprise to find a great potter living almost on your doorstep. Today I visited the studio of Jim Robison, an American-born ceramicist who has his gallery in the outskirts of Holmfirth, West, Yorkshire. He has lived and worked in the area for over forty-five years and his pottery reflects the beauty and harshness of the moorlands as well as its industrial heritage.

Jim is a quiet, modest, affable man who talks about his work with an enthusiasm that belies his seventy-eight years. He produces both functional ware and larger scale sculptural pieces which are exhibited not just in his gallery, but in various places in the town – local schools and the Civic Hall to name two. As I arrived at the studio, pieces of his work are everywhere – as you drive up to the gallery, on the patio, beside the car park, in the nearby fields. The site is more like a ceramic park – smaller pieces inside, larger pieces sited strategically outside.

Much of Jim’s contemporary work is slab-built. He does little throwing these days; most of the functional pieces that come from the studio are thrown by his assistant. He prefers to concentrate on larger slabbed work, built from large, flat sections and extruded forms, either rolled or hollowed. Some of the pieces have been textured by throwing clay against stone wall sections to give a rough surface which he integrates into larger works, often depicting elements of the landscape. Some are turned into garden pots, planters, hanging plant pots and window boxes. Almost all his slabbed work is stoneware, and has been outside for years without any sign of frost damage, cracking or chipping.

His smaller functional ware has a Japanese look, (one of the things that first attracted me to his work). A dripped cross design is Robison’s trademark, a motif which is repeated on many pots in the manner of Shoji Hamada’s ‘sugar cane’ pattern. The forms he tends to use are simple – slender cylinders, mugs, jugs and plates – and the glazed design equally uncomplicated, as though seeking perfection of one item in a Zen-like way. 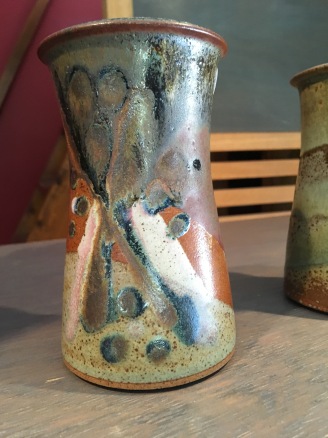 The smaller pieces are, of course, less original than the reliefs, but nonetheless they possess a restraint and honesty which is difficult to fake. Jim is candidly offhand, almost dismissive, about his thrown work, as though it’s something that has to be done in order to pay the bills so that he can continue with the sculptural work. However, it’s fair to say that I liked almost all of Robison’s work and I intend to pay another visit in the near future.

He is also the author of couple of excellent books: 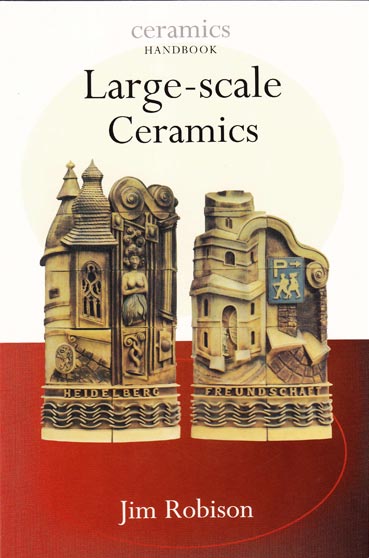